While working on the Stick-out assemblages I became aware that the lodge’s constructing had effectively displaced any pre-existing vegetation, a result that was still evident in the distribution of casuarina needles, manifested by a lack of needles extending into the area beneath the lodge. Motivated by this realisation and observation I was interested in exploring how vegetation could be used to represent interrelationships between the lodge and location. Welcome symbolically sought to replace some of these needles by wedging them into gaps between boards on a deck attached to the lodge. The deck’s location – both attached to the lodge but unprotected from environmental effects – placed it (like Stick-out) in the contested zone separating the lodge from the surrounding vegetation.

Although such a ‘reoccupation’ could be interpreted as parasitic, allowing the door to continue to function – by slicing the casuarina needles off level with the decking within the area inscribed by the door's opening – became a gesture of mediation. Incorporating the door's function also provided an opportunity to actually embed Welcome with the architecture and use this feature to highlight how interactions within ecologies consist of a layering of cause and effect. 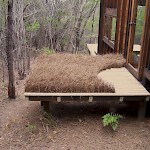 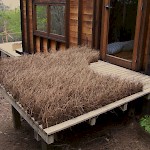 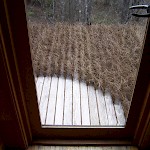 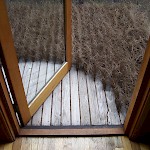 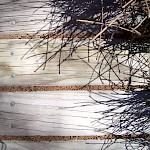